Our tumblr blog of the images of crime, mystery, and noir has never slowed! It updates many times a day.

Go to the Archive to see the scope of his madness!

Go here to see the continuation of the Hardboiled Project.

A funny serial mystery about the Caretaker of Nevermore Cemetery, with a new installment available every Friday!

(It is not about squirrels…though they do run thru the prose on occasion.)

Here’s a link to our archived, original blog, crated up and stored in a secret location, guarded by a troop of tea-drinking amateur sleuths.

I was so proud of myself! I got my Best Of for the decade done, and down to a total of 10! I’ve NEVER done that before, so I was strutting!

Granted, a bunch of them were series, and that means ALL of the series, so it’s not like I read only ten books over the decade. We know me better than this. And the series are, in no particular order:

Louise Penny’s “Inspector Gamache” series. I came late to this party, but I am fully onboard!

Anne Bishop’s “The Others” series, including the follow-ups after the original five.

Everything by Christine Feehan except the vampire and leopard series. Everything else. And I haven’t gotten to those yet, so stay tuned.

Maureen Johnson’s “Truly Devious” series. And that’s going to spill over into this decade.

And then I had a few individual titles. But then, see, I remembered all the books I hadn’t thought of, not because they were bad, but because a decade is a really long time in the book world, and I hadn’t really given the whole ten years – which included the shop being open for most of it.

So I’m going to throw out authors and titles, and if you have questions, just ask. Because this is gonna be a LOT longer than just 10! Ready? Here we go:

Joshilyn Jackson – I love all of hers, but The Almost Sisters is my favorite. So far. Until she writes the darned phone book.

Ernest Cline’s Ready Player One, which has its own cult following, and I’m so pleased!

Seanan McGuire’s “Toby Day” series, along with everything else she writes.

How could I overlook Craig Johnson’s “Longmire”? I don’t know what I was thinking.

Daniel O’Malley’s The Rook. Amber’s recommendations must be heeded.

Everything by Ben Winters (including grocery lists, I imagine) but especially Golden State.

Toni McGee Causey’s Saints  of the Lost and Found.

Seriously, anything by J. T. Ellison and Hank Phillippi Ryan. I love them both so much!

Can I throw in here Amber’s “52 Weeks with Christie”? Because wow. And her new blog, The Finder of Lost Things, is going to find a publisher soon, I’m positive.

To those of you whom I’ve missed, I’m so sorry! I really do love you! Blame it on my cold.

I’m going to stop here, but now it’s up to you. What did I recommend to you over the last 10 years that you loved? Or hated? I’m always interested where I missed as well as where I might have accidentally gotten it right. 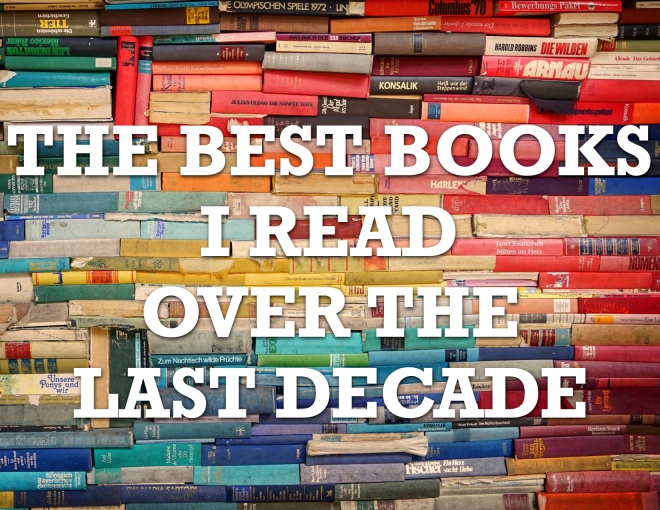 Okay, so here’s the deal.

I cannot confine a decade’s worth of favorites to one simple list — my entire being revolts at the thought. I am also uninterested in inducing a biblio-anxiety by attempting to do so!

So instead, I decided to create a series of short lists of my hands down, all-out favorites that I first read between January 1, 2010, and December 31, 2019. Whether or not they were published between those two dates is entirely incidental.

(Though I did make a separate list for those titles. See below.)

This was a close call but ultimately I chose The Rook because Ms. Thomas helped save herself while fending off some purple spores and rescued a possibly omniscient bunny!

#3 – Agatha Christie: She deserves a list all to herself otherwise, she’d whoop everyone else! Can you believe my year with her was all the way back in 2014?

**And Then There Was None is a masterpiece of suspense. So to give her other books a chance, I left it off! I also left off The Sleeping Murder as I’d read it well before this last decade!

4) Golden Age Favorites: Now, I loved all the books these authors wrote. However, these are my particular favorites within their series –

List No. 5: My Favorite Historical Series I Devoured As Fast as I Found Them –

Last But Not Least: My favorite YA/Kids books –

And even with all the books I’ve listed on here, I still feel like I’ve missed a few….sigh….And its also readily apparent I tend towards a certain flavor of mystery – and I’m all right with that!

Don’t forget you still have time to catch up on my other blog Finder of Lost Things before series two starts in a couple months!